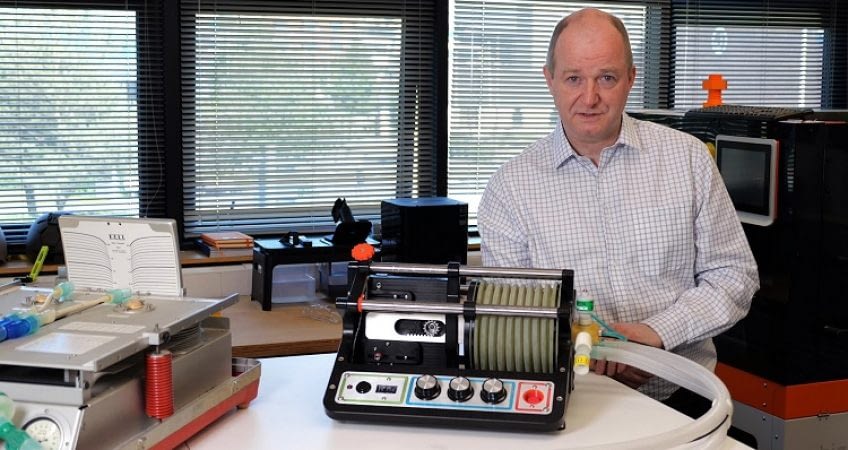 Here at I&G, we are proud to take part in groundbreaking demonstrations of technology, and perhaps nothing is quite as groundbreaking as this. Back in 2010, I&G Engineered assisted in the development and construction of the first machine in the world to successfully deliver xenon gas to a newborn baby to prevent brain injury.

The project was developed and managed by Marianne Thoresen, Professor of Neonatal Neuroscience at the University of Bristol, along with Dr. John Dingley, ABM University Health Board Consultant Anaesthetist and Reader in Anaesthetics at Swansea University’s School of Medicine. The study was funded by the children’s medical research charity  Sparks, and conducted at St Michael’s Hospital, part of University Hospitals Bristol NHS Foundation Trust.

How Did the Project Come About?

Every year in the UK, over 1,000 healthy babies born at full term suffer brain damage or worse. This is caused by a lack of either oxygen or blood supply when they are born. This deprivation can lead to major lifelong problems, such as cerebral palsy. Back in 1998, Professor Thoresen pioneered a treatment where newborn babies can have their body temperature lowered mildly. This helps to reduce damage in the newborn’s brain caused by a lack of oxygen. Since then, clinical trials have proven this method is safe and beneficial.

However, this method does not always work for all babies. For over 10 years prior to 2010, Dr. Dingley had been developing equipment in Swansea for xenon anaesthesia. He successfully invented a machine that delivers xenon gas to babies, and puts the exhaled gas through a waste filter and re-circulates it to be breathed again. Some types of military diving equipment works in a similar way, but the difficulty lied in building a small enough system to work for newborn babies. Dr. Dingley had this to say about the machine: “A key design feature of this machine is that it is very efficient, using less than 200ml of xenon per hour – less than the volume of a soft drinks can. Xenon is a precious and finite resource and difficult to extract so it can cost up to £30 per litre. As ventilated newborns breathe many litres of air per minute, any xenon based treatment would be impossibly expensive without an economical delivery method. Despite these challenges, the lack of side-effects and brain protecting properties of xenon make it uniquely attractive as a potential treatment to apply alongside cooling in these babies.”

This device was used to supply xenon gas to a newborn named Riley Joyce. Delivered at the Royal United Hospital, Riley was born in a critical condition and transferred to St. Michael’s Hospital in Bristol with signs of brain injury. Riley was born by emergency Caesarean section in Bath at full term. He had no pulse at birth and was not breathing. He was resuscitated, and his pulse returned but his breathing still required support. Due to his brain being starved of oxygen, Riley’s parents were told there was a 50% chance of permanent injury and disability. Professor Thoresen asked if they would agree to Riley being treated with xenon gas, the first in the world to be treated this way.

Riley was cooled to 33.5 degrees Celsius, and Dr. Dingley connected his breathing machine to the xenon delivery system for three hours. He was kept cool for 72 hours, and was able to breathe without aid from a machine on day five. President of Sparks Charity Sir Geoff Hurt of England World Cup fame, commented: “Congratulations to Professor Thoresen, Dr. Dingley and the rest of their dedicated team on this fantastic success. Breakthroughs such as this world-first graphically underscore the important role a charity like Sparks plays in funding pioneering research that really does make a difference. To me, a result like this is even more important than scoring the winning goal in a world cup final. I’m delighted that baby Riley hasn’t just survived a life or death situation, but can now look forward to a healthy future. That makes every penny Sparks has committed to this research work so worthwhile.”
Riley’s parents, Dane and Sarah Joyce said: “We are delighted that Riley is doing so well and we are extremely grateful that we were given this opportunity. Marianne was so passionate about the treatment and we truly believe that she had and still has the best interests of Riley in mind. It was traumatic to see our baby not breathing, but seeing the ambulance coming to collect Riley to take him to Bristol gave us hope that something could be done to help him. We would like to thank all the team at St Michael’s Hospital for everything they have done for us.”

What did I&G Engineering do to Help?

The machine designed by Dr. Dingley contained many components that were built specifically for purpose. Some were sourced from as far away as St. Petersburg in Russia. Dr. Dingley was quick to comment on the quality of the engineering available in South Wales: “The engineering heritage within South Wales has meant that I have been spoiled for choice whenever I have needed anything unusual constructed. Many local companies and individuals have helped me over the years, particularly PDR in Cardiff and I&G Engineering near Swansea. I designed equipment suitable for adults several years ago, however the challenges of developing a new design that works reliably and safely in babies is much greater.”

Everyone at I&G Engineering is beyond proud to have contributed towards the construction of such a ground breaking piece of technology. For more information regarding this story, take a look at this article.

GET IN TOUCH TODAY